Division (B) The Blues were away playing La Marina Seagulls which saw a nice result against a good side, winning well on three rinks and going very close on the other two. The game ended with a result of 8-4 as we collected 2 points for the overall (Shots 103-70). The rink winners being; Dave Saunders, Mike Inns & Jim Gracie (26-5). Noel Morrisroe, Wendy & Alan Ralph (23-11). Joan Inns, Ann & Jim Taylor (23-16).

The Golds were hosted by El Rancho Mustangs which ended with wins on two rinks and just missing out on the points for the overall (Shots 90-93), the game finished 4-8 with the rink winners being; Judy Carroll, Pauline & Lyndon Johnson (29-13). Pat Moore, Bill & Sue Jordan (20-14).

Division (C) A home game for The Silvers who welcomed San Miguel Commanches, this game saw some good bowling against an inform team and ended with the Silvers winning well on one rink and managing to keep their heads in front on another to claim four points. Result 4-8 (Shots 83-90). Winning teams were; Maggie Gray, Jean & Dave Giddings (22-12). Tom Heaslewood, Janet & Graham Doel (17-16).

Enterprise No Game for the Apollos this week.

Discovery The Pioneers played host to Greenland’s Chestnuts who won well on all but one rink, our only winners being; Pat Moore, Bill & Sue Jordan (23-14) who played a very good game to win well to secure two points with the game ending 2-10 (Shots 69-96).

Voyager The Sputniks were greeted by Greenland’s Beach, which saw most of the rinks going very close but we were very unlucky not to pick up any points from the home side. The game ended 0-12 (Shots 56-76). 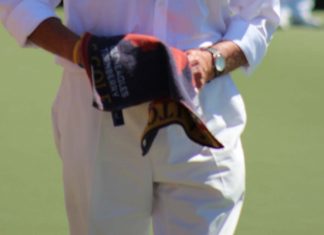 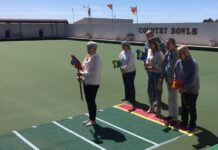 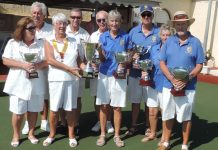