If you read the Leader last week, you will know that we did not have a report but San Miguel did, and if you read that you would know that our Seagulls lost a re-arranged game 10-0 to San Miguel Boxers.  No denying a poor result but a glance at the score cards I realised that we lost 2 rinks by 2 shots and 1 rink by 4 shots.  It just again shows the importance of all 18 ends.

The second half of the Discovery Division started on Jan 10 with the return fixture between our 2 teams, the Pathfinders and Explorers.   In the first game the Pathfinders won 8-2 and in this return fixture the Explorers got their revenge with a 7-3 victory.  Aided in no small way by a 22-13 win  courtesy of Steve Douglas, Margaret Finlayson & Peter Parsons, and a 22-10 win courtesy of Jean Tregoing, Jim Reeves & Don Fowkes.

Fri 14th What a way to start the New Year for Tom’s Sharks/Explorers – the Explorers won 8-2 on Monday and the Sharks beat Emerald Isle Cavaliers 10-0 on Friday with a difference on 91-52.  Well done and keep it up.

Meanwhile the Seagulls were away to San Luis Tigers, where they drew 5 points each winning 2 rinks and drawing 1 but lost the overall shots 60-67 – Well done still a good result away from home.

On a sadder note we held a farewell dinner for Jean & Terry Perchard who in the 20 years of living in Spain have been staunch supporters of Bowling in Spain. having held various positions between them. both at Club and League Committee Levels.  Goodbye and good luck with your future bowling in Sussex.

To finish on a happier note we helped Maureen Kidd celebrate her special birthday which enters her into a new decade which is very encouraging as she is still enjoying her bowls and hopefully will remain active doing so for many years to come. 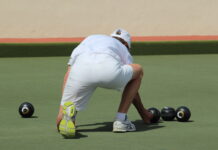 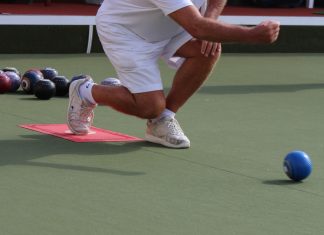 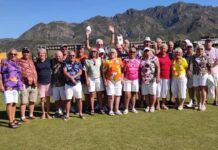 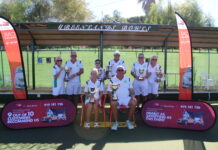 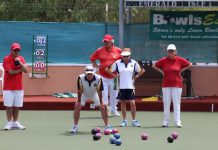