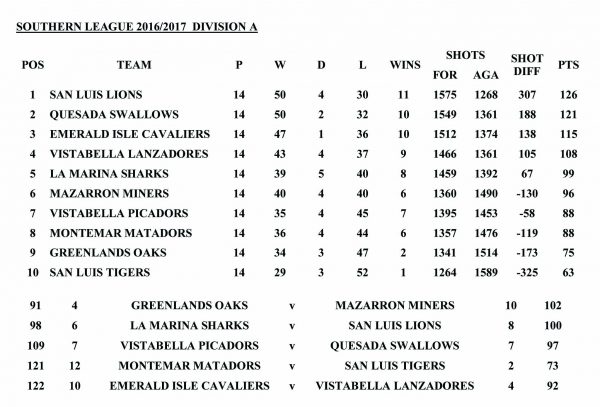 The Meteors had a really bad day at Quesada losing on all rinks, better luck next week!!  Jan Allen, Dave Greenland, Ian Rogers had hard lines and got beat 18-17.  Shots for 90 – Against 132.

The WASPS are still going strong, Wednesday at 1.30pm, Come along and have a try.  Suitable for all players. 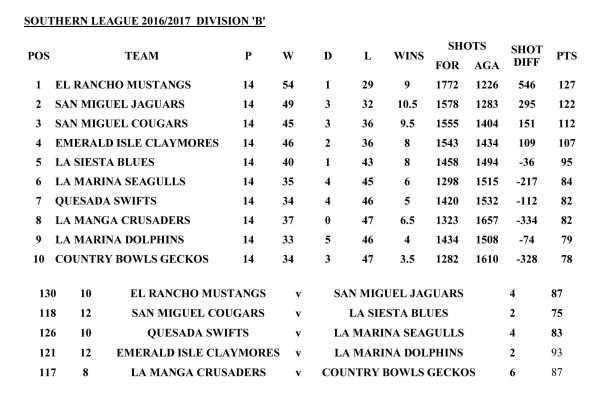 I wish I hadn’t said anything about our best week being last week as we only had one win this week.  Explorers away at Monte Mar playing the Matadors had a good game so I am told but the Opposition won 9-5. Dave Hadaway continued his good form with Jim Reeves and young  Anne Stone winning 22-12.  Margaret Finlayson scraped through by one shot with the help of Rob Finlayson and Maureen Kidd. Mike Stone battled to a draw with Jim Manning and Janet Parsons.        The Pathfinders didn’t find their path too well either at El Rancho or as the Captain said “It was a bad day at the office.” Went down 12-2 with our only winning rink being John Withers, Martin Butler and Paul Tregoing. Still counting up the overall score.        Our first win this week came through the Winter League with us beating Monte Mar by seven points to five.

Both won two and a half rinks each with ours being Shirley Hadaway, Don Harrison, Mike Smith and Anne Stone followed by Barry and Wendy Latham, Peter Parsons and Kathy Manning. The draw came from John Mallet, Mike Stone, Mo Kidd and Dave Bulfield.        The Sharks at home to San Luis Lions had a really close game and just lost overall by two shots with both sides winning three rinks. The winners were Alex Whyte, Jim Reeves and Kathy Manning;  Alan Castle, Phil Pape and Janet Parsons; last but not least Roy Hart, John Mallet and Andy Bartlett.        Seagulls flew over to Quesada to play the Swifts and were out flown by them to the tune of 10-4. The two winning rinks were Dave Taylor, Gina Hindle and Lynne Armitage plus Barry Latham, Wendy Latham and Barbara Forshaw.        The Dolphins played Emerald Claymores somewhere and lost 12-2. Our victorious threesome was Brian Duff, Martin Butler and Maria Duff. Well done to them. 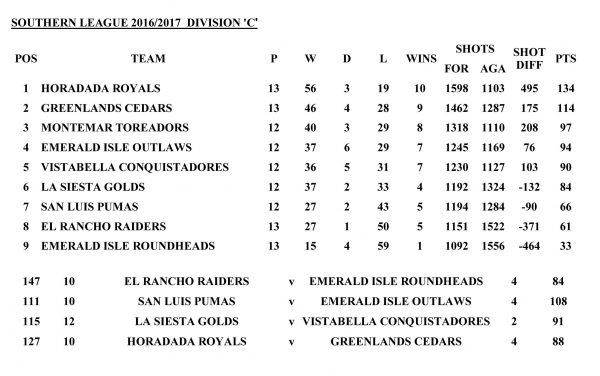 At the third time of arranging we were able to complete our match at Greenlands after bad weather had intervened previously.

After resuming on the eighth end and the previous scores a hard fought match ended with the Sycamores winning on four rinks with the Toreadors winning on shots. Well done to our winning rinks of Sheila Roberts, Danny King and skip Les Bounds. Cliff Norris, Howie Williams and skip Graham Smyth.

A fine all around performance by the Toreadors saw them winning on three rinks and drawing on one. Well done to the winning rinks of Sue Bounds, Les Bounds and skip Jan Gatward. Dave Thomas, Howie Williams and skip Graham Smyth. Steph Mathingson, Rita Towle skip Joan Harding and drawing rink of Sheila Roberts, Pauline Woodfine and Barrie Woodfine. Our two losing rinks both lost on the last end.

Winning and five rinks a good all around performance, well done team.

The week commenced with a set back for the Apollos in their quest for promotion with a home defeat by Montemar Toreadors by 115 shots to 99. La Siesta securing 5 points to their opponents 9. Winners for La Siesta were Dawn Taylor, Norman Adcroft and Harold Charleton 19-16, Sheila Chorley with Bill and Sue Jordan 21-19 whilst Irene Laverick, Ramsay Sinclair and Brian Gardiner managed a creditable draw 19-19.

The Pioneers made the long trip to Mazarron with a depleted squad and lost by 135 shots to 76 the sole winners in a 12-2 defeat being Jean James, Tom Heaslewood and Val Dalton 22-13. Well done to Tony Dalton and his team in getting a full team together in difficult circumstances.

Things picked up on Tuesday with the Fed 4’s results. The  Parakeets at Home to San Luis Bazas won on all three rinks getting the full 8 points with a shots difference of 54-40. The biggest win came from Joy and Brian Gardiner with Tony Campbell and Pat Reilly who won 18-9.The Hoopoes visited Horadada and came away with a 6-2 win by 70 shots to 34 and the biggest winning rink was Val Dalton, Jean Hepehi with Florence and Mike Edwards who won 32-7.

The Winter League team carried on from last week’s encouraging result with a home victory against Finca Guila by 95 shots to 79 picking up 7 points to their opponents 5.Winning rinks for La Siesta were achieved by Jack Cooper, Brian Harman with Bill and Sue Jordan by 23 shots to11 and Irene Laverick, Tony Campell, Pat Harman and Jean Cooper who won 25-14. The rink of Florence and Mike Edwards with Pat and Trish Reilly secured a further point with a draw 19-19.

The Blues travelled to San Miguel to play the Cougars and came away with just the single winning rink of Dave Davies, Brian Gardiner and Harold Charleton who won 21-8. The overall shots being 75-118, thus La Siesta came away with 2 points to San Miguel’s 12. The friendly team of Alex Morrice, Ramsey Sinclair and Beryl Styring managed to win their encounter by 14-12.

Before the Golds home match with Vistabella a minute’s silence was held in memory of Dave Livesey who passed away this week. Dave has been a member of La Siesta for several years, he will be sadly missed by all, both at the Bowls Club, and by his many friends in the Monday Cribbage League. Our thoughts are with Aileen and family at this sad time.

Good news for the Golds was an encouraging 12-2 victory over the Conquistadors by 115 shots to 91 taking 12 points to their opponents 2. Star rink was provided by Derek Souter, Penny Porter and Johnnie Ryder 27-12. Thanks to Jim Hudson for stepping in and providing a good win with Tom Heaslewood and Hilary Clarke by 22-14. So well done everybody for a great team effort.

Fed 4 s,   E.I. v Vistabella Vikings:   A perfect score for the Isle, winning on all 3 rinks, sorry I don’t have the individual names and scores, but a fine result, up to 3rd!!

Monday found The Pintos playing at home against The Pathfinders from La Marina, a stiffish breeze making the bowling a little tricky and as you would expect the home mastered it more quickly than The Pathfinders. But it was a good match with most mastering the mat at some time during the game, but it can be a little disconcerting when the wind changes just after release of the bowl and in the end the Pintos took 5 rinks and the overall shots.

The Broncos had a bye and I believe were playing a friendly at Emerald Isle in the afternoon.

On Friday morning the Mustangs played San Miguel Jaguars at El Rancho, which was bound to be a tough match against the then league leaders. The stiff cold breeze proved a little tricky, but the lack of runs makes it a fair surface all round. I am sure the Jaguars were a little disappointed in going away with 2 rinks and hence 4 points, but the Mustangs will be pleased against the strong visitors. 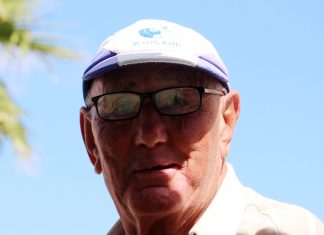 bowlsespana - November 1, 2020
0
Popular bowler Harry Rhodes passed away last Thursday whilst in first round action in the Emerald Isle Men’s Singles Competition. Harry was 10-1 up at... 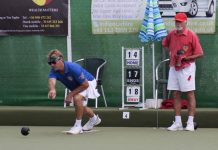 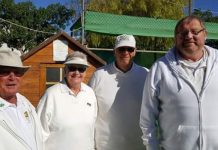 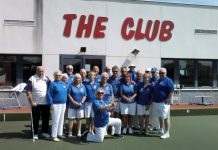 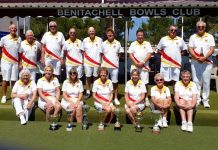