Another exciting start to the week in both Monday Leagues.  In the Discovery league the Pathfinders chopped down the Greenlands Sycamores 12-2.  A couple of close games with John Morgan, John Rae and Jeff Collins winning 14-12 and Sue Daniels, Garth Slater and Jean Perchard even closer with 14-13.

John Withers, George Furzer and Lorita Rae had a nice 22-13 win.  Always good for a win was Alan Castle, Steve Hindle and Mo Taylor with a very good 28-3 victory but to top the lot were Len Daniels, Mike Brain and Jean Tregoing with a resounding triumph of 39- 5.  Nearly caught Tom from last week.

Not to be out done the Explorers also won 12-2 but in this case only one of the rinks won easily as it often does so well done Dave Hadaway, Jim Reeves and Mo Kidd 23-9.  The other four rinks were reasonably close but nevertheless were winners. Mike Stone, Mike Smith and Steve Douglas won 16-14.  Tom Spencer, Cliff Rawlinson and Roger Stacey sored one more shot than their opponents. Don and Jean Fowkes plus Anne Stone won 18-11 whilst Margaret Finlayson, Phil Pape and Carol Smith grabbed an 18-13 win.

Come the Winter League and more excitement with us losing by 6 points but only losing the overall score by 6 shots.  Two rinks lost by just the one shot and Barry Latham, Peter Parsons, Wendy Latham and Dave O’Sullivan drew 12-12 all after the 18 ends but were first off the green. Thought we might get extra points for that. Dave Hadaway, John Rae, Ron Maiden and Mo Kidd won 17-9. Nice one.

Some people have been praying for rain and they got their prayer answered which means I get less writing to do.  So the rearranged games will be next Tuesday. The Merlins in the mornings so no roll up, sorry, and the Ospreys in the afternoon.  Really hope they get played then as Bill will go mad trying to fix Club Competitions otherwise. 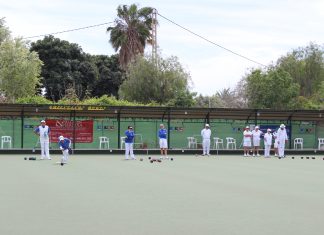 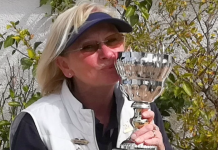 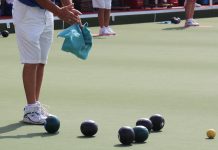 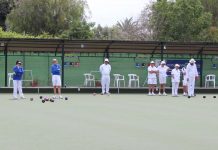