The Flamingos travelled to Greenland’s on Monday in good spirits. Our old sister club is blessed with some fine bowlers and so the morning progressed with each rink being keenly contested.

By early afternoon, however, the game had taken on a different look and the Flamingos went on to record another fine away win.

Friday saw the Gecko’s arriving at the club to a green that had experienced a wild hailstorm through the night and Graham, the owner of Country Bowls, working the carpet brush to clear the sitting water and make the green playable. After a couple of hours of hard work the game was back on.

San Miguel were tough opposition coming to Country Bowls from a great win against the top of the league team Mazarron Miners. The Gecko’s played hard and fought to the end in very difficult high winds resulting in a great win. The Gecko’s winning teams were Pat Patton, Den Wade and Brian Patton. 26 – 10, Ben Noke, Pat Ray and Brian Ray. 22 – 18, And Brenda Jiggins, Derek Jiggins and Ray Emmet. 18 – 13. With a total of 95 shots against San Miguel on 88,the Gecko’s enjoyed a welcome 8 – 4 win.

Our second game on Friday were the Cubs away to Vista Bella Conquistadors on a very windy afternoon. Whilst the bowls ran straight on one hand and swung far on the other, it took both teams all their skills and talent just to play to the jack. A closer game could not have been predicted with Country Bowls taking the shot difference of 6 and winning on 3 rinks. Overall score 8 – 4 to the Cubs.

A great week for Country Bowls, congratulations Cubs on a great win. Onwards and upwards. For any information please contact on email grahamandjo7@gmail.com , tel 966 19 1552 or visit the website www.countrybowlsmurcia.com

The Cedars were at home to Emerald Isle Roundheads. final score , Shots 102 – 63.  Points 10 – 2. Best winning rink – Zoe Wilcock, Carl Eagle, skip Ann Eagle. – 24 shots to 8. In the A Division, The Oaks were away to La Marina. Pipped to the post on a few rinks but unable to overcome a very good team on the day so no points to take away this time, Still onwards and upwards.

For all inquiries please telephone Chris Dewar on 698418987 or email dewarsinspain6246@gmail.com to find out more about our club please visit our website.  https://greenlands-bowls.wixsite.com/greenlandsbowlsclub

Off we go again another exciting week.  Not so good to start with though as the Explorers lost  9 – 3 at home to the Vistabella  Albatrosses.  Mike Stone and Co carrying on their winning ways 20 – 16.  So well done Mike, Carol Smith and Steve Douglas. Peter Parsons, Don Fowkes and Barbara Forshaw had admirable draw at 20 – 20.

Then away went the Pathfinders to play Vistabella  Eagles and came away 12 – 0 winners much to the delight of Captain Jean  Perchard and Hubby Terry who won 18 – 11 with  help from Margaret Sadler.

Not to be out done Barry Sadler, Dave McGaw and Desna Lowe won 26 – 14. Dave Hadaway, Bernie Carr and Jean Tregoing won 18 – 12 while John Withers, Mike Lowe and  Reg Jackson managed one less 17 – 12.  Garth Slater, Paul Tregoing and Trevor Hancock had a nice 22 – 14 win.  This puts the Pathfinders at the top of the Discovery League.

Tuesday was Race Night; It started out as Rat Racing and has since progressed to its present form of Monkey Racing. I daren’t comment how it got that name.  Over eighty people attended and it was an extremely funny and jovial evening with all punters having a great time. Sue Freeman was the overall Champion Jockey closely followed by Trevor Hancock.  Thanks to all members who put in the time and effort to make it such a success.

Not much success in the Winter league when we travelled up to Javea being beaten 10 – 2.  Our winning rink was Don Fowkes, Peter Parsons, Jean Fowkes and Jan Parsons, well done to them.

Come Friday and in the Southern League Div  A the Ospreys cut the Greenland Oaks down to size with a 12 – 0 whopping.  Rumour has it that the Captain might not get another game this year the way things are going.

In the Voyager Division both the Sputniks and the  Pioneers visited El Rancho and both had good results.The Sputniks winning by 82 shots to 64 picking up 10 points against the Palaminos whilst the Pioneers won by 87 shots to 78 against the Raiders.For the Sputniks best winning rinks came from Hilary Clarke, Rod Edgerton and Alan Ralph and from Joe Kocsis, Molly Russell and Willie McEvoy both winning their matches by 5 shots whilst Dot Kocsis,Jim Eastwood and Lee Plummer won by 4 shots.

For the Pioneers Pat Moore with Bill & Sue Jordan won by 19 shots and Joe Elkin,Derek Smith and Rab Logan won by 13 shots.

In the Enterprise Division the Apollos entertained Quesada Pearls and won by 105 shots to 60 picking up 10 points.Star performance came from the rink of Derek Biggs,Jenny Bowman and Irene Mangan winning 23 shots to 8.

Our Winter League team travelled to Bonalba and won on 2 of the 5 rinks picking up 4 points. A further rink was close which would have enabled a draw with their opponents.

In the Southern League  A Division the Blues visited San Luis Lions and picked up 2 points the overall match shots being 64-111 winning on the rink of Joy & Brian Gardiner with Jean Cooper by 18 shots to 14.

In the B Division the Golds played their re-arranged home game against El Rancho Broncos and won by 116 shots to 69 picking up 10 points with biggest winning rink coming from Jo Elkin,Tony Dalton and Vic Mahomet winning 37-13 closely followed by Derek Smith, Val Dalton and Rab Logan winning by 16 shots and Doug Beattie,Norman Adcroft and Fay Beattie winning by 15 shots the Golds then on Friday travelled to San Luis Leopards and had an excellent 118-62 shots victory.the team picked up 11 points to the Leopards 1. Well played to all of the team keeping up their winning run.

In the C Division the Silvers played the Rangers at a very windy El Rancho and lost by 96 shots to 51.Well done to Joe Kocsis, Ken Stringfellow and John Clarke who managed to win on their rink by 20 shots to 13 picking up 2 points for the Silvers.

A very good result away at Quesada winning on two rinks and drawing on two. Well  done everyone.

After the Toreadors good start to the season in division B it came to a halt against the Royals. The Toreadors won on one rink and drew on one rink. Well done to the winning rink of Jan and Bill Webster skip John Hunt.

On Monday, a very overcast day, Quesada Diamonds entertained the table topping Emerald Isle Titans. There were some very close games and whilst there were some showers, rain didn’t stop play!

The friendly which was a very good game ended in Quesada’s favour 23 shots to 13 shots.

Meantime, Quesada Pearls were playing at La Siesta in similar cold and showery conditions. La Siesta Apollo’s had an excellent mornings bowls, leading all the way in a match that unfortunately ended with Quesada winning on only one rink. The final score was 10 points to La Siesta and 2 points to Quesada with the shots 105-60.

In the Discovery Division, Quesada Rubies played at Emerald Isle against the Moonrakers who won the match 10-2 points and 113-58 shots.

On Wednesday the Winter league team had an early start this week and travelled to Benitachell for their match. The match ended with 6 points to each team but Benitachell finished ahead on shots 91-74.

And on Friday, a glorious sunny, but rather windy day, Quesada Swifts hosted El Rancho. In a match that was played in excellent spirits with some good bowling from both teams, the Swifts ended the match with a good win of 9-3 points.

Just a reminder that our popular Saturday morning chicken drive is open to visitors. Green fees are only 6 euros if you have your own shoes and bowls and 7 euros if you need to hire them. Anyone interested in taking part, please report to The Club, Quesada for a 9.30am start.

The week started with a cold drizzly, miserable Monday and finished on Friday with a cold, bright but very windy morning. Not really the results we wanted for some of our teams this week but hopefully we will do better next week.

The Dalmatians were home to Greenland’s Maples this week and managed an 8 points to 4 victory, 99 shots to 82. The highest winning rink belonged to Bob Nesbitt, Dave Champion & Barbara Scotthern (remember mentioning them last week too!) 25:8. The Pointers took over in the afternoon beating the San Luis Romulans 8:4 with 101 shots to 64. The 2 losing rinks lost by the smallest of margins but the glory went to Bob Hanton, Ann Allen & Dave Greenland winning 27:8. The Beagles were away at San Luis facing the Trekkers but were able to win on just 1 rink with overall shots 90:92 – how close was that! Well done to Dave Johnson, Val Hignett & Mary Dyer winning 27:17. As the rain increased, the Alsatians turned up to face the Klingons and faired no better, 72 shots to 109. Well done to Anita Brown, Ron Nairey & Eddie Cowan (another deja-vu moment) for getting the 2 points, 20:10.

The Winter League team was at home to Greenlands this week, taking the match 8 points to 4, 87:82. The highest winners were Don Whitney, Val Collier, Chris Collier & Stuart Denholm 23:6, helping to get the team to 2nd place.

On Friday, the Boxers travelled to Country Bowls to take on the Geckos and came away with 4 points, 88 shots to 95. The highest winners, here we go again! Bob Nesbitt and Barbara Scotthern, this time teamed up with Ann Young. However, the win of the week went to the Bulldogs who welcomed the Emerald Isle Claymores to SMBC and finished with 10 points, 90 shots to 65. The losing rink only lost by 2, but the gold star, as last week, belonged to Sandy Hannan, Tom Dalgleish & Dave Greenland, 25 points to 9.

The Drivers were away to MonteMar Matadors, they had two big wins which gave them enough shots to win the long game making it a draw.. VB 103(6) – 83(6) MM.

The Discovery league Eagles had a home game against La Marina Pathfinders, the opposition were strong and carried all the points back up the N332.

The Voyager league Buggies also at home playing the Emerald Isle Saturn’s had four wins, the Saturn’s were penalised for not bringing a mixed team.

WINTER LEAGUE. Vistabella away to MonteMar, it was well worth the journey..three wins for another eight points. VB 90(8) – 75(4) MM. Great company and a lovely carvery before we hit the road homewards.

Southern League A Div Lanzadores welcomed San Luis Tigers and had full points across the board sending the tigers home with their furry tails between their legs. Shots VB 105 (12) – 55(0) SL.

C Div Swingers were away playing the Pumas at San Luis where they had another fantastic win taking all the points, VB 107(12) – 70(0) SL.

The Conquistadors at home to the Country Bowls Cubs won on two rinks, the windy conditions made it tricky for both teams VB 81(4) – 87(8)CB. 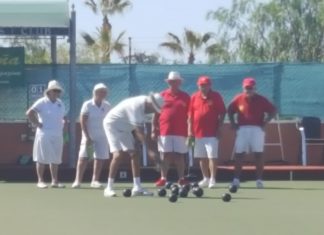 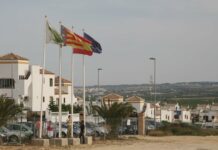 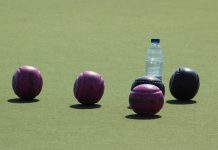 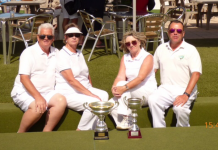 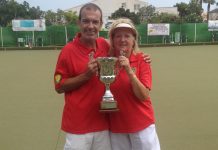